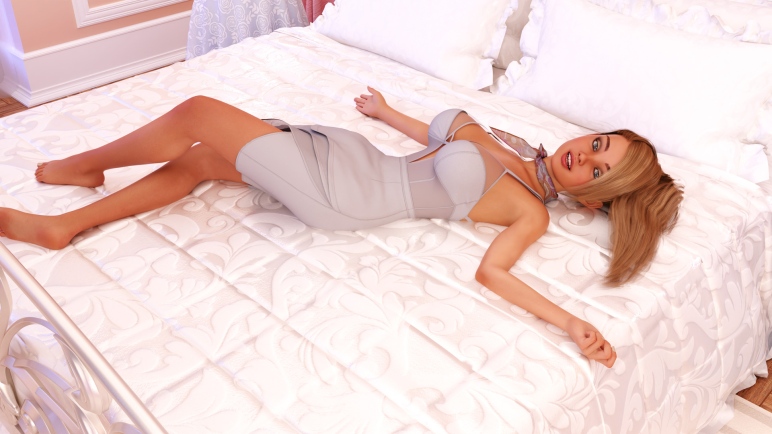 Hey everyone, this is a short post to let you all know that we’ve fixed some bugs and errors that you guys have listed

since the first update from SL – Chapter 2 was released last Saturday.

We’ve re-uploaded the download links that contain all of the fixes/edits that we’ve had to make.

– On the Childhood Friend path, after you get out of bed there was a scene in the kitchen where she leaves you a note.

This scene was only meant for the non-CF path and wasn’t coded correctly. It’s now been fixed so it doesn’t show up anymore.

– Fixed the answers to the fifth question in Yuki’s quiz. Not every answer is Samurai Mark now 😉

– The scene when you have lunch with Connie previously had dialogue where it stated that you had never met her father (The Boss) previously when you had indeed spoken to him at her birthday party.

– On the Twins path, if you used a save that had transferred from Chapter 1 to Chapter 2, during the office meeting scene on the second day, the dialogue suggested that you had walked out on Ivy/Lily during the hotel room sex scene in Chapter 1, even you hadn’t.

– Deleted out some repetitive lines (e.g. overuse of the MC reminding everyone that he’s leaving at the end of the summer!)

– Previously, the Nicole video call was coming up for some players on the Single path (if you had broken up with her) when it shouldn’t have.

That has been corrected now so if you are on the Single path then you don’t view that scene.

– Duplicate lines. One has been coded correctly.

Changes to the Walkthroughs:

An issue with the points allocation for Shortcake:

At the end of Chapter 1, we’d stated that the maximum points that you could accrue for Shortcake was 169.

That figure was wrong and the correct max score was actually 167.

For those of you who are using the “manual entry” option to start Chapter 2, the highest maximum score for Shortcake will now be set at 167.

Incorrect information in the Doughnut WT:

Previously, to locate Doughnut #5 on the Yuki path, it stated that you were required to get 2-4 questions correct to see this doughnut on the screen.

You need to get between 1-3 questions correct in order to see and click on this doughnut to unveil the fifth Yuki image.

That has been edited in the Doughnut walkthrough now.

– details added to an option for the In-Game Walkthrough (on the Connie path).

As you can see, even though we do numerous checks and beta tests before each update is released, not everything goes according to plan and sometimes things get overlooked.

Or we simply have no idea about issues in our releases until after the update has been put out.

Thanks to everyone who has let us know of any problems that they’ve found in last weekend’s update, and also to anyone who did some testing to help make sure we fixed some of them.

Have a great weekend, I’ll be in touch again soon.